VAT rules within the EU have changed since July 2021. When shipping to another EU country, the VAT rates of the country of destination apply.

The final price will be displayed in your basket before confirming your order.

Thanks for your understanding.

Known as the ‘bucket’ or ‘tub’ car, the Kübelwagen Type 82 was a light military vehicle designed by Ferdinand Porsche and built by Volkswagen during WWI for military use. It was the axis equivalent of the “Jeep”, although the production over 50,000 which ended in 1945 was much less than its famous allied counterpart (over 650,000).

Simple, reliable, rugged, with good cross-country performance, cheap and tailored for mass-production the Volkswagen Kübelwagen was everything needed for a versatile standard liaison/staff/recce/utility vehicle on the battlefield.

The Kübelwagen was simplicity itself. With a two-wheel-drive configuration so successful to cope with snow, ice and mud, the vehicle surprised even those in charge of the development. In some tests, it showed even superior handling characteristics than some 4x4s. This was due to a combination of a lightweight chassis and smooth, flat underbody which "surfed" on soft surfaces just like a motorized sled, allowing it to follow tracked vehicles without much trouble.

The Kübelwagen was capable of a top speed was about 80kph/50mph from it’s rear mounted air-cooled flat 4, 985cc engine and featured a self-locking differential, limiting slippage for retaining traction. With its air-cooled configuration, it dispensed with a radiator and was therefore less vulnerable to bullets, while being also highly tolerant to hot and cold climates.

Having already released the Allied Jeep, it felt only right to deliver the Axis equivalent in the form of a 1/12th scale Kübelwagen Type 82. The rear mounted air-cooled engine has been faithfully recreated to mirror the original, an engine that lasted for 65 years in the classic VW Beetle with production finally halting in Mexico, 2003. The 985cc engine was later upgraded to 1131cc, and then gradually increased displacement with the Porsche 356 using a 1488cc engine, doubling the horsepower from the original. The cylinders of the horizontally opposed engine are distributed on both sides, a 130 motor in the right cylinder position, and another 130 motor reserved for the left side, which can output twice as much power when applied to the VW T1 or Porsche 356 platform.

The engine crankshaft flywheel is connected by a belt to drive the generator and the cooling fan as well. The semi-circular fan fairing is a major feature, in which the airflow is distributed to the cylinders on both sides. All is restored within the 1/12th model, so that you can observe the blades rotating through the fan intake when the motor is running. The real Kübelwagen had 4 forward gears with the maximum speed when in each gear as follows, 1st gear 18.4km/h; 2nd gear 32.4km/h; 3rd gear 54.2km/h; 4th gear 83.6km/h. The corresponding red line gearshift tips is available on the dashboard. On the model, we designed a 2-speed shift to simulate the speed of the 1st and 3rd gears of the real car. Power crosses over from the top of the rear axle differential and then returns to the rear axle. The model shares the same structure as the real engine, with the benefit of compactness, making it easy to switch between 4WD and RWD modes. This shift function via a simple button on the transmitter is perfectly reproduced on the model to provide more control when driving off-road.

Then let’s move to chassis. The popular door axle in today's climbing car market has been in mass production for barrel car as early as 82 years ago, from which wheelside reducer reduction ratio of 15:21 has learned a lot, making the barrel car chassis minimum ground clearance of 310mm, dwarfing all modern off-road cars on the market today. On the real car, the front and rear wheel speeds are balanced by increasing the front axle differential gear ratio while on the model we set the door axle reduction ratio to 1:1 for common front and rear axle differentials.

The model features a solid load-bearing chassis with stamped central spine for high torsional resistance, that also houses the central drive shaft and electrical wiring. The one-piece injection moulding features the texture of the original full-size metal stamping with plastic reinforcement areas restored according to the actual car. The front and rear wheels adopt torsion-bar-springs independent suspension, allowing long travel capability which also take up little space. We use torsion springs instead of torsion bar springs to present the front and rear suspension, easy to disassemble and fine tune.

The car body, on which the R&D team spent the most time on you can see the Bosch horn and headlights and Notek camouflage lights. The tires are the most common 5.25×16 as used on the barrel car. Like the real car, the simulated wheels need to be fixed with 5 screws, with a full function installed spare on the front hood, ready for use if called upon. Remove the spare tire and the typical mid-cycle spare tire bracket is readily accessible. The windshield can be moved down and fixed on the front bracket and the real rearview mirror’s angle is adjustable just like a real car.

Four opening doors are generally not worth a mention, but that is until you are able to open and lock them by turning the door handle. The seats feature comfortable soft foam cushions that are a little luxurious by 1939 standards.

The dashboard displays the speed and timing of gear changes with the current mileage 203 km, this being about the distance driven from the Wolfsburg factory to Berlin. No doubt we are selling a new car here. You might find it hard to start your Typ82. Fear not as the start button is mounted on the lower left corner of the dashboard - just press it through the steering wheel. As with other models in the FMS scale range the steering wheel and axle are linked, when you steer the wheels, the steering wheel does the same. With 1/12 figures, a driver can be vividly displayed to add additional realism.

The armrest in front of the rear seats has four clips in the middle that fit into holes in the floor to hold four 98K rifles which were produced by the Mauser Arsenal in Oberndorf and needed to be purchased separately for 70 Reichsmark each at the 1939 exchange rate. The rear seatbacks can be lowered for easy access to supplies from the trunk. Great effort has been made to optimize the layout of the electronics to prevent the battery or receiver from taking up space in the trunk. The trunk height of the Typ82 was designed to accommodate 20L oil (water) Jerry can or to store weapons, ammunition, and food supplies. All these features are properly restored to make the user experience more fun, but of course these supplies, like the 98K have to be purchased separately.

For the electronic system a 4-channel digital proportional remote-control system is used. In addition to channels 1 & 2 for steering and throttle control, the 3rd channel controls the gearshift and the 4th channel switches between 4WD and RWD. There is also integrated light control, which allows you to turn on the headlights during normal night driving. Linked turn signals and brake lights are at the rear of the car. Users can only turn on the anti-aircraft lights during the night light restriction.

Then comes to the packaging which uses environmental friendly foam material to simulate the World War II German tin ammunition boxes. The recyclable box is easy to carry and can be used for long-distance transport and storage.

We here at FMS hope you enjoy the Kübelwagen Type 82 as much as we did in bringing it to life in the form of this classic piece of wartime history. 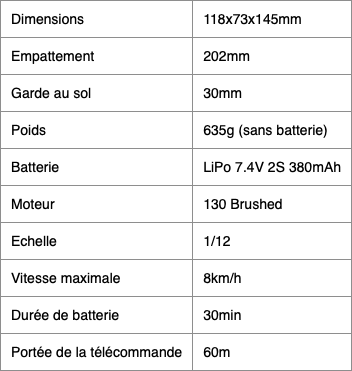